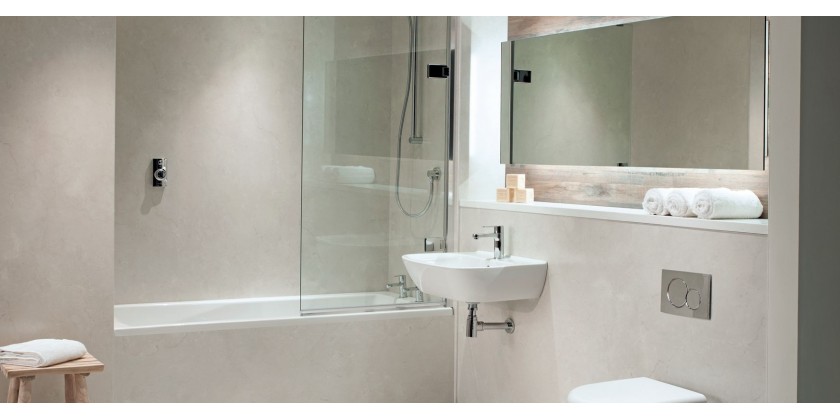 Wall panelling Vs tiling article; here at BBk Direct we don’t just sell products we try and make a difference in every person’s life that we talk to, encounter or deal with, even if it is just in small way, like being polite and courteous, giving helpful advice, being sympathetic to a problem that most feel is mundane and just simply doing our Jobs to the best of our abilities. Every person in our company feels the same, from our sales advisors all the way to the Directors of BBK, and that is what this articles is about, we are the authority in everything home improvement so instead of just selling you a product we would rather like to share what we have learnt over the years to help you make informed decisions.

Most often tiles are made of ceramic and glazed typically for inside use, however they can also be made from other hardwearing materials like stone, metal and even glass. Areas of use for tiles can be in the kitchen, bathroom and even the bedroom, and used on walls, floors, shower enclosures and even on table tops. However they are also used for roofing and can be slate or fired clay, so as you can see the term “tiles” is extremely broad and everyone has different attributes that make it suitable for its application. In other words do your homework properly before selecting tiles as your preferred method of finishing of a job.

The word “tile” is derived from the French word tuile, which is, in turn, from the Latin word tegula, meaning a roof tile composed of fired clay.

Tiling has some amazing attributes and used for 1000’s of years, however in today’s modern setting can add elevated costs to renovation and building projects as it is timely to install and requires very skilled tradesman to get a perfect end result.

Now wall panelling; Wall panels are generally large single pieces of material, usually rectangular in shape and has practical and visual appeal, often it is also referred to as wall cladding. Material used can be glass, natural stone, laminated wood (To form large sheets), composite material or even a mixture of materials to give it even better functionality and long lasting attributes. Insulation and sound proofing are just some of its attributes, but one of the biggest draw cards is the fact that it drastically lowers building costs as it is easy to install. Therefor wall cladding requires less man power, skill levels and working hours, also walls need no further applications such as plaster, paint or tiles. Most popular and highest quality laminate panels in the UK at the moment are Bushboard Nuance Fibo & Showerwall they have a 100% water proof core, tongue & groove panels for even easier installation and mimic natural materials like granite, marble and wood in texture and feel with the added benefit of being 100% hygienic and non-porous, meaning no mould growth is possible. Other popular panels are Minerva Solid Surface Wall Panels (No sub-frame only pure solid surface material) slightly more costly but has all the attributes of the others, and including more, such as being reparable, renewable and can be seamlessly joined.

So in a nutshell, wall cladding is more cost effective in the long run, easier to install and has tons of attributes that are a must have in the home.

Some interesting history about tilling

At Elamite Temple at Chogha Zanbil dating back to the 13th century BC is some of the earliest use of glazed bricks. In Mesopotamia about 575 BC they use to import craftsman from all around the world for Ancient Mesopotamian palaces and one of the most famous places where glazed and coloured bricks (tiles) were used is the Ishtar Gate of Babylon, which is now partly rebuilt in the city of berlin.

Persian tilework definitely had a diamond age and this was during the Timurid Empire between 1370 & 1405. This empire comprised of modern day Iran, Mesopotamia, Afghanistan a lot of Central Asia and parts of Pakistan, Syria and Turkey. During this time the moraq style of tiling was most popular, single coloured tiles were cut into small geometric pieces and assembled by pouring liquid plaster between them. A person could say that this was the birth place of modern day wall panelling because once hardened the panels were lifted onto walls and this technique was also not limited to straight flat surfaces, therefore was widely used to cover the interior and exterior of domes, especially Mosques in the kingdom.

Tiles have been a popular choice for a very long time. Unfortunately the truth is that in this modern age with such an array of materials, new composites and manufacturing procedures available, it is no longer the number one choice, not even for a bathroom. Wall panelling especially laminate with a 100% waterproof core and solid surface (composite) just have too many positive attributes to ignore, and definitely would be our number one choice. Please don’t be fooled by the low price tag of wall panelling, its quality and durability far outshines products of higher cost, and it even saves you more money when it comes to the installation. If you like the tile affect and your heart is set on this, you will be thrilled to hear that there is even tile affect panelling available with grout lines and indentation for a more realistic look and feel, so now you can get the best of both worlds.

Here are the great attributes of wall panelling once again

100% waterproof so no moisture damage possible, also the surface is 100% non-porous and doesn’t promote bacteria and mould growth, making cleaning and maintenance a breeze. These two attributes make it extremely suitable for kitchen use whether cladding the entire kitchen or just using it as a splashback. It only requires a sealant/adhesive for installation and is directly adhered to the wall (Can also use framing brackets) and comes in T&G panels so installation can be done in as little as an hour, if panels are pre-cut before installing. This saves you time and in return also a lot money.

The biggest problem you have is picking out a colour, as they come in many colours, textures and designs that this could be quite intimidating. So regardless of your taste or design aspirations we know that you will find exactly what you looking for when selecting wall cladding.

All fields are required

Excellent communication and a seamless order to delivery process. Thank you!
30-10-2022
Review By Alicia,

Excellent communication, great price, fabulous product. Was really impressed with every stage of my ...
30-10-2022
Review By Steven Gomm,

Once again, another great price, service and delivery. Communication about worktop and delivery was ...
http://www.stevengomm.co.uk/ 26-09-2022
Review By Maggie Botham,

Efficient and prompt service after ordering on line. Delivery was as agreed.All in all excellent pri ...
08-09-2022
See all Reviews
Copywrite 2017 - www.bbk-direct.uk.com (Worktops & Flooring UK Ltd)