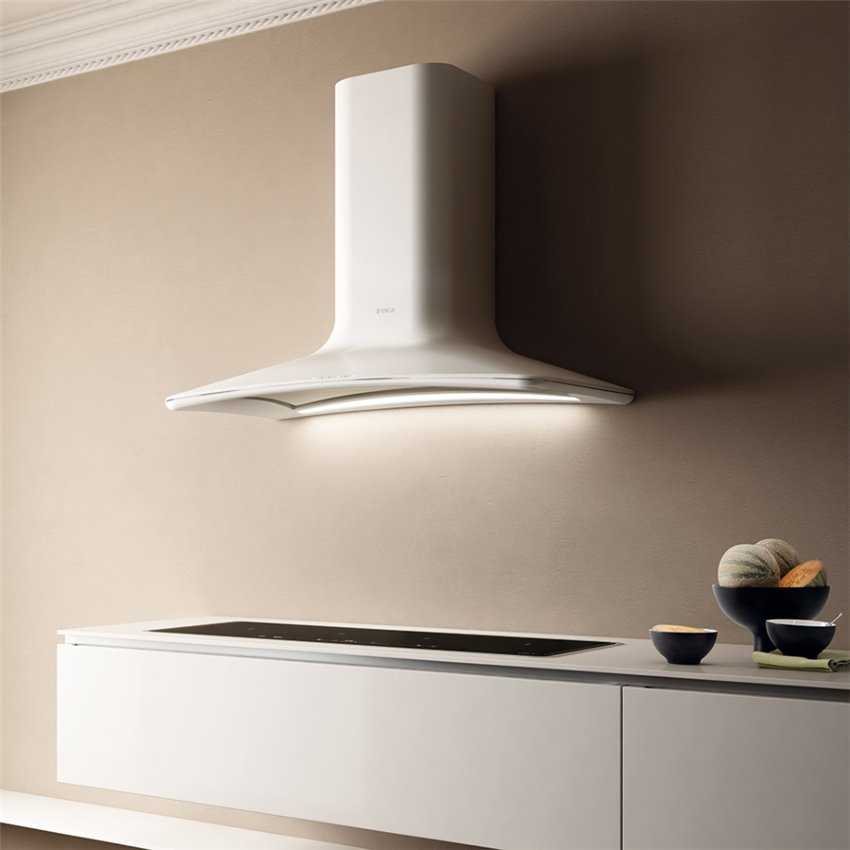 An extractor hood, more commonly known as a Cooker Hood is an appliance containing a fan situated above the stove or hob in a kitchen. Other than looking flashy and slightly futuristic, the main purpose of the cooker hood is to extract the steam, airborne greases and fumes from the air through a vacuum like suction to keep the air clean and smel...

An extractor hood, more commonly known as a Cooker Hood is an appliance containing a fan situated above the stove or hob in a kitchen. Other than looking flashy and slightly futuristic, the main purpose of the cooker hood is to extract the steam, airborne greases and fumes from the air through a vacuum like suction to keep the air clean and smelling fresh. A definite must have in every kitchen, for health purposes as well as the cherry on top to complete your desired kitchen style.

Here at BBK Direct we have a diverse selection of Cooker hoods in different styles to suit each individual aesthetic. The more professional and formal the cooker – those who treat cooking more like a profession than a hobby – the sleeker the appliance. For the practical cookers, we have beautiful flat hoods and we even have ones that light up for those who just want something nice to look at. A Cooker Hood for every occasion and for every profession.

Cooker Hoods are never to be bought first, rather think of it as an accessory to your kitchen – always to be put on last. When buying an extractor hood or a cooker hood you have to keep the rest of your kitchen in mind. You want it to blend in with your theme and have a smooth finish to the over all look.

To start with, you will have to get to know the six main types of extractor hoods.

The first one is the most common, the Wall Mounted hood or better known as the Chimney hood. Should your hob back into a wall, you may want to consider this style. Be careful with them though, as they are quite large it could either blend seamlessly into the rest of your theme or steal the show and become the main attraction.

The Island hood, possibly the most popular hood due to the large variety of styles it comes in. It can be the usual chimney style with a flat hood or glass and slightly curved, there are some that mimic lights and hand quite elegantly from the ceiling; for a minimalistic kitchen there is the Downdraft hood that slides down under your worktop and behind your hob when not in use and pops smoothly slides back up at a press of a button. The Island hood is used when your stove top is positioned on your island unit, it is also typically bigger than the hob in order to trap all the fumes.

This next one attaches to the roof of your kitchen, called the Ceiling hood. It typically looks like a light – such as with the island unit – and is usually used in Modern styled kitchens.

The Built-in hood slots perfectly into the kitchen unit situated above the hob. It is designed to be hidden and usually does not stick out past that of the units unless it has a pull feature where it can be enlarged to properly cover the size of the hob.

Canopy cooker hoods, the almost identical twin to the Built-in hood. This cooker hood is usually fitted to the underside of your kitchen cabinet above your hob, but whereas the canopy hood is always on show, the built-in hood is not.

Last but not least is the Slimline hood which like all hoods – is situated directly above your hob. This hood slots un between the units above your hob and has a longer depth than that of the unit causing it to stick out.

Now that we have had a look at the different types of hoods, let us have a look at the other important factors involved in your final decision.

One of the main things to consider is the size of your hob. The cooker hood needs to sufficiently cover the hob when positioned centrally above it, too small of a hood will be redundant as it will not collect the unwanted substances and odours in the atmosphere. Too big of a hood will throw the whole kitchen off balance as it will look entirely too large and take up much needed and wanted space. Extractor hoods that are placed at the back of a kitchen should roughly be the same size as the hob below it, those situated above island units should be slightly larger as to adequately collect the fumes from the air and trap grease.

It is not only the size of the hob that plays a role, but the type too. You will undoubtably want to match your cooker hood to the hob, so it is important to find out the make and model of your stove top before making your final decision.

Speaking of research, do you know the difference between ducted and ductless hoods? Do not worry if you do not, not many people do.

Ducted hoods are preferred over ductless hoods as the grease, smoke and other unwanted airborne particles collected from your stove top are taken outside instead of ventilated and put back in your kitchen. This is the main differentiation between ducted and ductless hoods.

While having a ducted hood is preferred, you are limited as to where they can be put due to the fact that it needs to be connected to a duct to move the particles outside without obstructing other installations in the wall or the ceiling of your kitchen. Ductless hoods however can be placed anywhere as it does not need to vent to the exterior of your house. The way a ductless extractor hood works is by filtering the air sucked in and releasing it back into the kitchen while collecting the grease particles and the other not so great fumes. More often than not, the filter system contains activated charcoal to help lessen or take away bad odours and smoke from the air. The downside to having a ductless hood is that it is necessary to clean it quite regularly for it to efficiently work depending in the amount of cooking done.

Another factor to consider is the amount of noise your hood makes. Not many people view this as part of the decision-making process but do not sweep this one under the rug – it is most definitely an important element when considering your options. Any good quality and good choice hood should have a noise level of less than 65 decibels, unless of course you do not mind a bit of noise, in that case the amount can be pushed up to 70 but no more if you make a habit of socialising in your kitchen.

Cooker Hoods  There are 52 products.

Efficient and prompt service after ordering on line. Delivery was as agreed.All in all excellent pri ...
08-09-2022
Review By Stephen Rawson,

The best price for Mirostone that I could find and the speed of delivery was unbelievable, I would d ...
26-08-2022 Verified Purchase
Review By Adie,